When we peep into the Indian society we come to know that the contemporary problems and issues such as crime, rape, injustice, exploitation and ill-health are main obstacles for the progress of the country. The safety and security of the women is not only need but the propriety of the time. Besides, there is a call for the good health and fitness of the youth. Therefore, there is an urgent need to make both boys and girls strong and confident physically and mentally. For that Lathi- Kathi Prashikshan is better skill to develop and use for self defense.

The Women Study Center of the college organized Lathi-Kathi Prashikshan shibir in collaboration with the Bhuvaykunth Atmanu Sansthan , Tekadi(Adyal), Tah-Bramhapuri from 20 January 2020 to 30 January 2020. Prof. B. M. Dange , Co-ordinator of Women Study Center took an initiative to organize lathi kathi prashikshan shibir for the self defense of students. The Bhuvaykunth Atmanu Sansthan ,Tekadi(Adyal) provided trainer for lathi-kathi prashikshan. The Shibir commenced with the inaugural function on 20 January 2020 at 9.00 am.

After completion of inaugural function, the trainer Akshay Kukade started lathi-kathi prashikshan at 10.00 am. It continued till 11.30 am. Total 43 students of the college participated in the shibir to learn the skill of lathi-kathi. The prashikshan continued till 30th January 2020 with the same timing i.e. 10.00 am to 11.30 am. During the training students were enthusiastic. With enthusiasm they learn the lessons of lathi-kathi for their self defense and fitness.

There were some problems at the initial stage of this programme because students were unfamiliar with the skill of lathi-kathi. Even they did not have track shoots. As the training progressed, they became familiar with it. The Resources were provided by the College and Bhuvaykunth Atmanu Sansthan , Tekadi(Adyal), Tah Bramhapuri 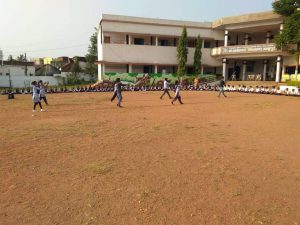 Title of the Practice: Water Conservation and Water harvesting campaign

Today we are facing many environmental problems such as global warming, draught, flood, pollutions, etc. The college has a mission to create environmental awareness among people. Water is a universal solvent. Without water human beings cannot live. It is an urgent need to save water for the betterment of all living creatures. So it was decided to organize water Conservation and Water Harvesting campaign by the volunteers of nature club/ students of environment studies.

The Nature Club of the college took an initiative to organize water conservation and water harvesting campaign in the nearby villages of Bramhapuri. So it was decided to form a group of students to visit various villages nearby Bramhapuri. The volunteers of Nature Club visited many villages such as Bondegaon, Maher, Nanhori, Kahali, Khandala, Moushi, Maldongari, Nandgaon, Adyal tekdi and Torgaon. They also visited to nagar parishad Bramhapuri and other areas. A group of students first of all visited to gram panchayat of the respective village where they organized awareness program on water conservation and water harvesting. They created awareness among citizens of the respective village regarding the importance of water conservation and water harvesting. The reputed daily newspaper of the Maharashtra entitled ‘The Lokmat’ appreciated the work done by the Nature Club of the college.

There were some problems at the initial stage of this campaign because of the unresponsiveness of the citizens but latter they responded to the campaign. The resources were provided by the college. 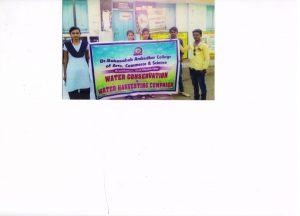 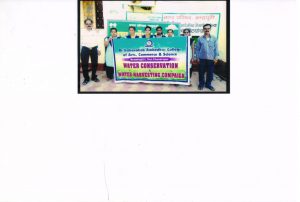